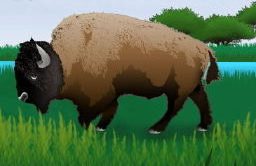 Afterlife – The Dakota believed in an afterlife. What do you think there view was of what life after death?

The Deer and Buffalo Hunts  – Find out what the East Santee Dakota did during hunting season. Do you think they hunted the same animals all year round?

Buffalo Pony – A “buffalo pony,” sometimes called a “war pony,” was the most prized possession among the Teton Sioux. Learn what made these horses special.

Becoming a Buffalo Hunter – How did you learn to hunt buffalo? How old did you have to be? Video with photos as primary resources from the Library of Congress.

Becoming a Buffalo Hunter in Native American Culture – Same audio as above, but featuring animation by 7 Generation Games. These two videos together are great for lessons on primary sources.

Dakota Tracking Ability – You may think of the Dakota as living in tribes, but individual tribal members or families often went hunting or to visit relatives. So, how did they track down their tribe again?

Counting Coup -What does it mean to count coup? What’s a coup stick? Why was counting coup considered an act of bravery?

Education of Dakota Boys – Boys were expected to learn to hunt, to protect the buffalo herd and their tribe.

Earning an Eagle Feather – Eagle feathers were earned through acts of bravery or generosity. If you ever wondered why Native Americans might be offended by seeing someone wearing a bonnet of eagle feathers on Halloween, watch this video.

Eagle Pits – Dead animals were used as bait for eagle traps. Sometimes, though, the hunter caught more than he expected.

Story of the Lost Wife – An old legend of a woman who left her abusive husband for a wolf. How do you think that worked out?

Winter Time – How did the Dakota keep warm in the winter? What did they do all winter?